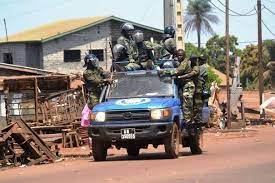 While the political opposition and civil society intend to multiply actions on the ground to bring down the military junta, which overthrew Alpha Cond on September 5, 2021, and which clings to power, a young activist from the UFDG is actively sought.

El hadjMamoudou Diallo, influential activist of the UFDG, the main political formation of the Guinean opposition, who has been very active in the political demonstrations of the last weeks is targeted by the authorities of the transition.

According to our information, this young political activist, who has escaped arrest on several occasions by the defense and security forces, has not made a public appearance for ten days.

A situation that worries his relatives who wonder if something happened to him after the wave of arrests of pro-democracy activists in the aftermath of the demonstrations of July 28 and 29 and the days that followed, given that he one of the organizers.

Asked a member of the FNDC, who requested anonymity, with whom he was the day after the demonstration provides some details.

“What I know is that after the soldiers raided his home in Wanindara where the family compound had been completely ransacked by men in uniform, he was not there. We were hiding together in a place. That day, moreover, we narrowly escaped arrest. After him, he changed neighborhoods believing that where we were hidden was too exposed. He left us to go elsewhere. Since then, we haven’t seen each other, but I called him twice. But his phone no longer works. His family having left the home after the agents of the defense and security forces ransacked the family home, I have not heard from him,” relates MSD.

According to a source close to the family of this young man contacted by Kababachir.com, armed men raided the home of this young political activist, who for the moment remains invisible.

Alpha Diallo, one of his relatives, who lent himself to our questions, explains: “Since 6 p.m., two pick-ups of gendarmes have searched our home. They created a panic in our neighborhood here in Wanindara. Some young people fled. I too hid. They returned first. In the evening, around 9 p.m., two returned in civilian clothes to ask an old woman where El hadjMamoudou Diallo lived. But the children had already seen the pick-ups parked at the crossroads. This meant that my cousin, who is known in politics, was alerted, like the other young people who were preparing for a mobilization for the FNDC march”.

Faced with the muzzling of its activists and the militarization of the Hamdallaye-Bambéto-Cosa-Wandidara axis, stronghold of the political opposition, the management of the UFDG, the party of former Prime Minister CellouDalein Diallo, which has become the main opponent of the military junta, denounces the threats and intimidation of his supporters.

FodéOussouFofana, Vice-President of the UFDG, who spoke this morning on local radio, accused the CNRD of a hidden agenda in the management of the transition: « These agitations of the junta military is nothing more than silencing pro-democracy activists, in order to cling to power. See today, they do not talk about elections and only scare away political actors and civil society in order to stay in power. A situation that scares away foreign investors. Look today at these people shot dead at each demonstration and the multiple arrests, not to mention the material damage recorded during the demonstrations, ”deplores the former deputy.

But, deprives FodéOussouFofana, “we will not back down. Colonel MamadiDoumbouya and his clan must understand that we will not allow them to take the country hostage. We want a transition as short as possible which will lead to free, transparent and credible elections”, indicated the Vice-President of the UFDG.

While we still have no news of this UFDG activist and certain members of his family, who would have taken to their heels, the party of CellouDalein Diallo calls national and international opinion to witness, about the intimidation and persecution of members of his political family by the military junta.

Asked about a possible arrest of this young political activist, Colonel MoryKaba, Head of Communication of the national police, did not want to comment on this information. He told us on the phone, without worrying about the macabre assessment of the demonstrations which cost the lives of a dozen people, that  »the security services ensure the maintenance of order in the city in strict compliance with the law, and could not tolerate excesses.

At the latest news, the political and biological family of El hadjMamoudou Diallo still have no news of the young activist.